To make this site work properly, we sometimes place small data files called cookies on your device. Find out more

Sending follow-up emails is quite a controversial topic in the Digital PR industry. As some journalists tend to label follow-up emails as annoying and unwanted, it has caused some PRs to steer clear of sending them to avoid potentially damaging their relationships with certain journalists.

With many believing it could make the difference in landing coverage and links,  we’ve weighed up the pros and cons on the ultimate question: whether we should be following up or not?

The digital PR team at The Evergreen Agency are big fans of follow up emails; without sending them, we would’ve missed out on some of our best coverage to date! In this article we will be covering the following topics on sending journalists follow-up emails:

As PRs, we know that journalists are extremely busy and receive a ton of emails in their inbox each day. So, do follow up emails really make a difference?

Some would argue that follow up emails add to the pile of unread emails in journalists’ inboxes. PRs may think, if your subject line and pitch was interesting and relevant enough, it would’ve caught their eye in the first place!

Follow-ups could also potentially risk a good relationship with journalists who may quickly become tired of seeing your emails, and some PRs will say it is all too common to receive an unimpressed response from journalists because of this. We’ve all had our fair share, and here’s mine!

However, follow-up emails can be extremely effective too. A second email can help to get your pitch noticed by a journalist that missed it the first time or can see a journalist reconsider your idea and decide that it could work.

How many follow-up emails is too many, and how frequently should you send them?

The answer to this question depends on various factors. Personally, I usually send one follow-up email 2-3 days after the initial pitch was sent out if I have heard nothing back. Of course, the amount of time you wait could be deadline dependent, especially if your idea is based around a date, e.g. Mother’s Day. In some circumstances, it may be necessary to send more than one follow up email if your pitch relates to a topic far in advance to it becoming relevant.

I was curious to find out other people’s opinions on the topic and what works best for them, so we did a good old Twitter poll.

From the people who voted, sending one follow up email 1-2 days after the initial pitch was the most popular. 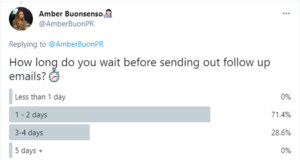 What to include in a follow-up email

Another important question; what should you include in a follow-up email?

We keep follow-up emails short and simple and send these as a reply to the original pitch where the main information is. Some tips we would recommend:

Sending a follow-up email has proven beneficial as it reminds journalists who may have genuinely forgotten to reply with further information to send their response.

An example of this for me was when a journalist from a popular national publication was looking for ways to celebrate Valentine’s Day. Initially, I had pitched a client’s service and had received no response, so I sent a follow-up email two days later, to find that they had now decided to do a specific product round up and were looking for cocktail delivery kits. To my luck, our client did this product and was still a perfect fit which landed them a link on the site, which had a Domain Authority of 90, in a super relevant article!

As PR’s we always want to know how we can improve our campaigns and outreach tactics, which receiving feedback is great for. Follow-up emails are a great way to encourage feedback from journalists and you can even ask for this in your follow-up with a simple “I would love to hear your thoughts.” It is important to remember that journalists have different opinions, so do not be disheartened by any negative feedback you receive. Here is an example of two very different pieces of feedback I received from the same pitch…

We all know that the news can change extremely quickly, and something that a journalist who wasn’t interested in yesterday could now be super relevant due to a breaking news story. Sending a follow up a few days later is almost giving them a second chance to think about your idea and after having a second glance at your pitch they may decide that they want to cover your campaign.

The reminders PRs receive about how busy journalists’ inboxes are are never-ending, which is another reason a second email is necessary. Journalists do not have time to open every email they receive; your pitch could easily get lost in a pile of emails when a journalist takes a lunch break, for example. Sending that follow-up email is essentially a second attempt at getting noticed, and can definitely work!

Ultimately, there is no right or wrong when it comes to follow-up emails, so make sure you’re doing what works best for you and getting those all-important results!

For more digital PR, SEO and PPC tips, sign up to our newsletter and never miss another update!

Top PPC resources that won’t bore you to death

Brighton SEO 2021 – our recap, highlights and our MD’s Brighton debut!